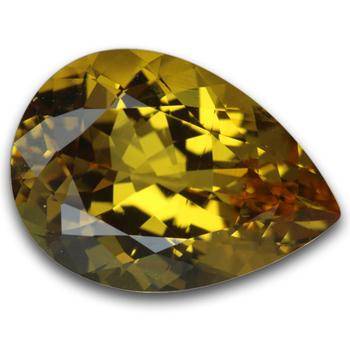 The yellow beryl goes by many other names- golden beryl, yellow emerald. Yellow beryl is most commonly known as heliodors, Latin for “gift from the sun”. Trace amounts of iron and uranium combine in the crystal structure to give yellow beryl it’s titular stunning yellow-golden hues.

The rarest forms of heliodors display a vibrant golden-yellow body color and chatoyancy, or a thin reflection of light that bisects the gem like a cat’s eye.

Most of the world’s yellow beryl are produced in Brazil, Madagascar, Namibia, Nigeria, Zimbabwe, Sri Lanka and Russia.

- Heliodor gained popularity as a gemstone after the completion of a jewelry piece meant for Kaiser Wilhelm II of Germany and his wife.