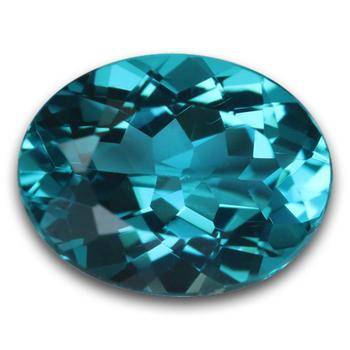 Apatite is named after apate, the Greek word for deceit, since it can often be similar in appearance to many other precious minerals like beryls, tourmalines, topazes and peridots. While considered to be “too brittle” for jewelry use, apatite is a popular collector’s stone. Blue Brazilian apatites and those with blue-green hues similar to Paraiba tourmalines are the highest priced specimens. Rich purple apatite gems from Maine are also highly coveted.

Apatite can often display a rare chatoyancy, or a reflected slit of light resembling a cat’s eye. Some specimens also display a beautiful blue-yellow fluorescence that is prized by mineral collectors around the world. They require special care to maintain their transparency and lustre as they are extremely fragile to abrasives, heat, chemicals and ammonia.

Apatite is commonly found in Myanmar, India, Kenya, Madagascar, South Africa, and Norway. The most prized blue apatites are found in Brazil, while Mexico is the most popular supplier of luminescent yellow apatite specimens.

- Apatite is formed of the same mineral that makes up the bones and teeth of most animals, including humans!

- Moon rocks brought back by Apollo astronauts in the 1960’s contained traces of apatite.