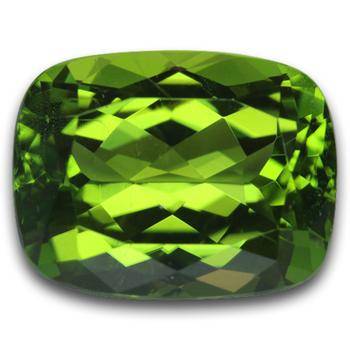 Peridots have been mined for their rich green hues for over 3500 years. The Ancient Egyptians worshipped the stone, calling peridots the “gems of the sun”. The August birthstone was believed to protect the wearer from nightmares and anxiety. The gem is also called the Evening Emerald, since its color remains constant under artificial and natural lighting.

Unlike most gemstones, peridots are not formed in the earth’s crust. They are formed in the mantle and brought up by volcanic eruptions. Its pigmentation depends on the trace elements of iron within the crystal. Peridots display high double refraction- that is, you can a clear double image of its facets if you peer closely.

- The presence of gem-quality peridots has been found on meteorite pieces that crash landed on earth millions of years ago.

- Throughout history, peridots have been mistaken with emeralds due to their similar colors. Some historians even believe that a majority of the emeralds that adorned Cleopatra weren’t emeralds, but peridots!

- The incredible Cathedral of Saint Peter and Mary stands in Cologne, Germany. The most famous piece of art within, The Shrine of The Three Kings, is adorned with beautiful 200 carat peridots.