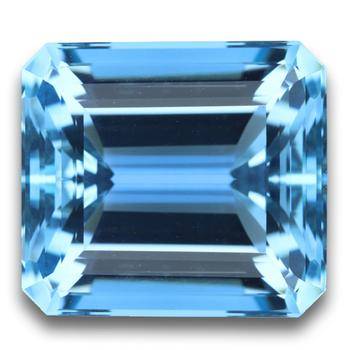 Aquamarine has, as its name suggests, historically significant links to the sea. Derived from “aqua marina”, Latin for “sea water”, it was a popular gemstone among sailors. They believed it would protect them against seasickness and unforeseen accidents on long voyages. It is the birthstone for March, and has been historically viewed as a stone that brings peace, calm and protection against harm.

Aquamarine is one of the most popular blue gemstones, famed for its clarity, sparkle and jewelry-grade hardness. Specimens with high color saturation, like Santa Maria aquamarines are the most sought-after varieties for gemstone enthusiasts. The hue in each stone varies with the presence of ferrous and ferric iron in the rough aquamarine.

The world’s most prized aquamarines are mined in Brazil, in the regions of Minas Gerais, Espirito Santo and Bahia. Africa also hosts several aquamarine mines, in Madagascar, Mozambique, Tanzania and Nigeria. Aquamarine deposits are also concentrated around India, Pakistan, China and Myanmar.

- The world’s largest cut aquamarine, Dom Pedro, was mined in Brazil, around 1980- weighing in at a whopping 100 pounds and over 100,363 carats. It is currently exhibited at the Natural History Museum at the Smithsonian in Washington, DC.

- Aquamarine jewelry is a popular 19th anniversary gift since the stone was believed to bless people with peaceful, long relationships with their significant others.

- Princess Diana was known for her preference for aquamarine and diamond sets. She famously wore a custom commissioned aquamarine ring during her visit to Sydney, Australia.