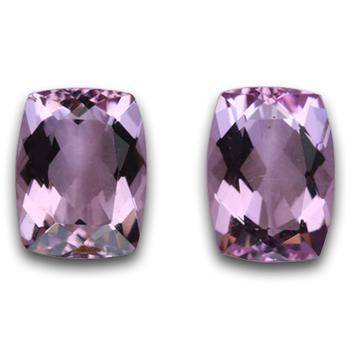 Among the beryl family, morganite is one of the rarest forms of gemstones, even rarer than aquamarine and emeralds, making the gemstone highly coveted by collectors. This light to violet-pink variety of beryl was first discovered in Madagascar in 1910. It was named by gemologist George F. Kunz in the honor of J.P. Morgan, a notable American financier and avid gem collector.

Due to its beautiful pastel pink and salmon shades, morganites have often been called pink emeralds. Unlike emeralds, morganite stones boast exceptional clarity and transparency, rarely forming with visible inclusions. Morganite rarely occurs in vivid colors, except in larger stones. Pure pink, peach and salmon overtones are in high demand among this variety of pink gemstones.

Madagascar still provides the most prized high quality morganite gemstones, and is renowned for its rare vivid magenta-hued stones. Brazil is also a major source of morganite, with smaller deposits in Afghanistan, Namibia, Mozambique and the US.

- One of the largest morganite specimens was unearthed in Maine in the fall of 1989. It weighed in at a hefty 50lbs, or 115,000 carats. It was called the Rose of Maine and was later cut into a number of exquisite morganite pieces.