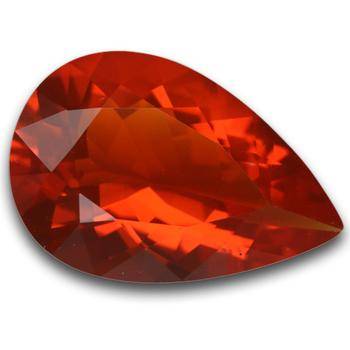 Unlike other varieties of opal, fire opals are not known for their “play of color”, but rather their warm, vivacious orange to red tones. The radiant stone was considered a symbol of fervent love, passion and vitality in India, the Persian kingdom, among the Mayans and the Aztecs.

Fire opals get their warm glow from traces of iron oxide within the stone. These gemstones range in hues from yellow to reddish-brown, and are naturally found in remarkably large sizes, opening up new possibilities in the ways they can be cut and designed. They are best set into pendants, earrings and pins that are not usually subjected to rough wear, on account of the stone’s softness.

Fire opal is prominently mined in Mexico, in the states of Chihuahua, Hidalgo, Queretaro, Michoacan, Julisio and San Luis Potosi. Other providers include Brazil, Oregon, Guatemala, Australia and British Columbia.

- The drier the mining source is, the more durable the fire opal.

- The fire opal was especially prized by the Mayan and Aztec peoples, who called it “quetzalitzlipyollitli”, meaning “the stone of the bird of paradise”.