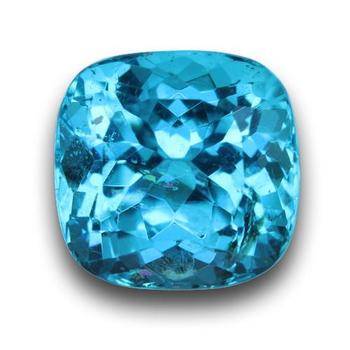 Discovered recently in 1989, Paraiba tourmalines are renowned for their intense blue hues. They are among the world’s most prized gemstones for their electric blue, almost neon tones with high color saturations. As the name suggests, these specimens were discovered in the Paraiba region of Brazil by avid gem collector Heitor Dimas Barbosa.

Paraiba tourmalines are different in composition to other tourmalines. They owe their rich color to copper, an element that has never been observed in tourmalines before. Paraibas are valued for their color over clarity. The finest Paraiba tourmalines in the world boast highly saturated neon blue colors, and are faceted until they scintillate with a glowing blue aura that is visible even under low light settings.

Brazilian paraibas are some of the highest quality tourmalines in the world. They have also recently been discovered in Nigeria and Mozambique, although these gemstones are priced lower than the fabled Paraiba variety.

- Due to its intense color saturation and rarity, Paraiba tourmalines are some of the highest priced gemstones in the world. It is not uncommon for authentic Brazilian paraibas to be priced at over five figures per carat.