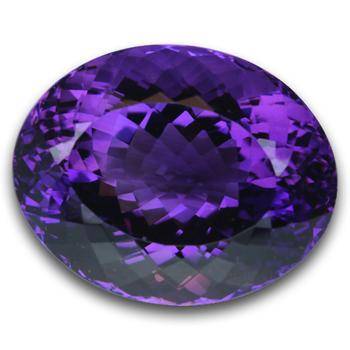 Amethyst is one of the most well-known specimens among the quartz family of gemstones, easily distinguishable by its delicate pink to rich purple hues. The word “amethyst” is derived from the Greek word “Amethustos”- “a” meaning “not” and “methustos” meaning “to intoxicate”. In the ancient times, amethyst was thought to protect people against delirium from wine!

Amethyst still ranks as the most expensive and desirable variety of quartz due to its unique royal purple color and exceptional body clarity. This gemstone is often formed in hollow, crystal-lined geodes (some are big enough to stand in!). The shade and hue of the gem depends on the amount of iron impurities within the stone. The finest amethyst specimens can range from reddish-purple to a deep purple similar to that of a Cabernet Sauvignon grape.

Brazil is a major supplier of natural amethyst. It can also be found in Uruguay, Austria, Russia, South Korea and Zambia, among other places.

- Ancient Egyptians wore amethysts in amulets for protection against harm.

- Due to its royal color, amethyst has been a favorite among nobility, with several pieces being incorporated into the British Crown Jewels. Catherine the Great particularly favored the gemstone.

- Amethyst is deeply associated with St. Valentine, the patron saint of romantic love, who was said to wear an amethyst ring carved with the image of Cupid. It subsequently became the birthstone for February.