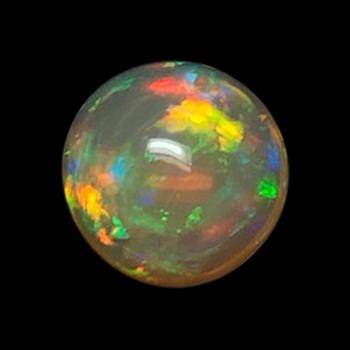 Color(s): Gray, white, black base with a rainbow of color flashes

Opal has been praised by artists, conquerors, writers and poets for centuries as a symbol of luck and prosperity. It gets its name from the Latin word “opalus”, meaning “precious stone”. True to its name, it was a prized gemstone among Romans, who used the stone as a symbol to boast about their wealth and status.

Unlike other gemstones, opal is amorphous, and does not have a defined crystal structure. This leads to the precious gem forming in unpredictable and unique ways. The most beautiful precious opals display a vivid “play of color”, a phenomenon where they display unique internal colors in every shade of the rainbow. They are one of the birthstones for October, and are very popular for their iridescence and kaleidoscope of colors.

Currently, Australian opals are considered some of the finest in the world. New South Wales, Queensland and South Australia supply 95-97% of the world’s opal supply. Ethiopia is also a rich source, followed by Brazil, Mexico, Hungary, US, Peru and Nicaragua.

- Opal has been found on the surface of Mars! In 2015, NASA’s Mars Reconnaissance Orbiter recorded footage of hydrated silica in a basin on the red planet.

- Queen Victoria adored opals. She helped popularize the stone once again during her reign, when she frequently wore the gem in a series of exquisite jewelry pieces.

- Opals have been mentioned in William Shakespeare’s works, who called the stone the “queen of gems” in his play Twelfth Night, written between 1601 and 1602.